Along makes a fire to prepare for dinner. His grandmother, who lives 15 minutes’ walk away, built two vegetable plots for him, and pays regular visits despite not living with him. Photo taken on Nov 2, 2010 [Photos/CFP]

A six-year-old HIV-positive child named Along has been collecting wood to support himself since both of his parents died from the virus.

He receives 70 yuan of subsistence allowance per month from the local civil bureau plus periodical material supplies from kindhearted people, but he still lives alone without a guardian.

“The boy received toys from people who read about him. [Photo/Zhou Hua/Xinhua”] 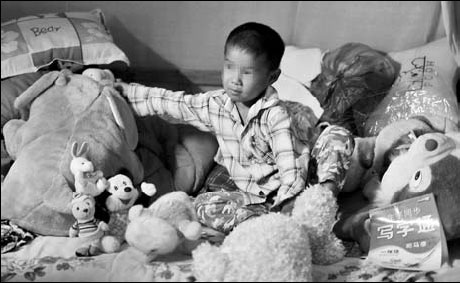 “A Long makes a fire to cook. [Photo/China Photo Press”]

Until recently, a 6-year-old HIV-positive boy has lived holed up in a remote mountain village, cut off from humanity with only a dog for company. Chen Feng reports.

A Long is 6. But his world is far removed from his contemporaries. There are no transformer toys, PSP games or friends to play with, only a rough brick structure he calls home and a dog, his constant companion. The HIV-positive boy lives in Niucheping village at the foot of Malu Mountain near Liuzhou, Guangxi Zhuang autonomous region.

His mother died of AIDS in 2009 and his father, racked by a terrible cough and fever, succumbed in the summer.

Dressed in tattered clothes, A Long’s only solace is Lao Hei or Old Black, his dog.

He lives at the end of a muddy path on top of the mountain in his windowless, gray-brick house, with worn wooden doors and rough flooring, permeated by a musty odor.

In contrast, most of the other villagers live in brand new buildings, further down the mountain.

A Long’s parents moved to the top of the mountain six years ago after being diagnosed as HIV- positive.

The boy washes his clothes and cooks his own food at an age when his contemporaries are still being fed by their parents.

Putting some rice and green vegetables into a pot and placing it on a stove made of several blocks of cement, he starts a fire with amazing speed.

He uses no oil or salt but still eats his meal with great relish and sets aside a bit for his dog.

He often sits in the open area in front of his home staring at the path that leads to the outside world, hugging his dog, lost in thought.

He says he has never ventured down the mountain, after his father’s death.

He tells people who visit him – after he came to media attention recently – with great excitement that, “I was in school but only for one term.”

He often takes out his old textbooks, stroking them like little treasures.

Chen Xiyou, headmaster of Malushan Primary School, says: “We allowed A Long to take our pre-school course for one term, but then we had to ask him to leave after his father died of AIDS.

“We have to consider the feelings of the other parents,” Chen says.

A Long is also HIV-positive but has no clue what those letters mean. All he knows is that those who were once his friends have deserted him and doctors refused to help when he accidentally tipped boiling water on his hands.

“But my grandmother always comes to see me,” the boy says.

However, his 84-year-old grandmother will not say why she has not taken him to live with her and his uncles and aunts.

A Long receives a subsidy of 70 yuan ($11.50) from social security and free anti-HIV medicines.

The introverted boy seems overwhelmed with all the attention he has been getting recently.

He is, however, delighted with a basketball that people bought him after reading about him on the Net.

He also practices writing Chinese characters in the sand and is eager to show off his kungfu kicks to visitors.

The latest news is that an old couple has decided to adopt A Long and Old Black, as well as the chicken he is raising.

The local Red Cross Association is also talking about providing proper medical care for A Long.

But there is still one question that troubles the little boy: “When can I go back to school?”

Yu Tianyu contributed to the story.

What You Should Know About HIV

- HIV can NOT be spread through casual/household contact. HIV is not spread through hugging, kissing, shaking hands, sharing toys, sneezing, coughing, sharing food, sharing drinks, bathing, swimming or any other casual way. It has been proven that HIV and AIDS can only be spread through sexual contact, birth, breastfeeding and intravenously (such as used needles).
- HIV is now considered a chronic but manageable disease. With treatment, people who are HIV+ can live indefinitely without developing AIDS and can live long and full lives.
- People who are HIV+ deserve to be treated with love, respect, support and acceptance as all people do. If anyone wants more info on transmission, there is great info on the Center for Disease Control website.

Grew Up with HIV